Anushka Sharma in Saree
I have no favourite actresses, I just “like” some and Anuskha Sharma is one of them. She has a beaming radiant smile, a beautiful face, enviable height, and even more enviable figure. Anushka Sharma is seen mostly in western outfits for her public appearances, but many a times she has been spotted in Indian traditional wear. I love Anushka Sharma in sarees because she does not experiment and twist sarees in such a way that they do not look like sarees anymore, aka Sonam Kapoor. Anushka Sharma wears sarees without any “renovation” and in all its glory. I found some pics from the net, where she has done complete justice to the Indian attire and vice versa. Take a look:

She looks so pretty in this off-white net saree with a plain black low cut blouse with chunky earrings. 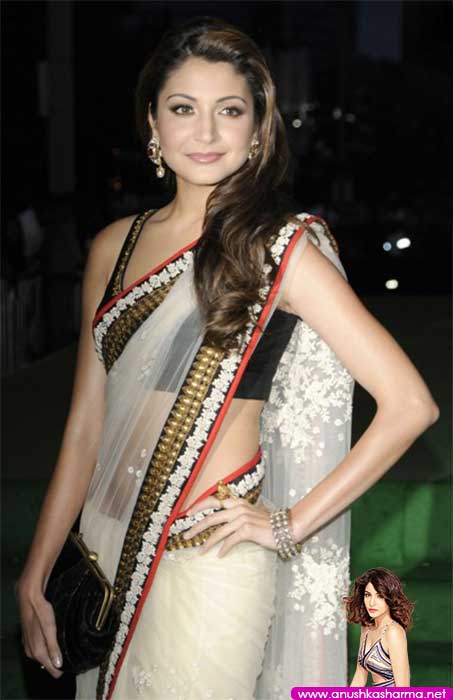 Here’s another saree I love, its the beautiful color I am floored with: 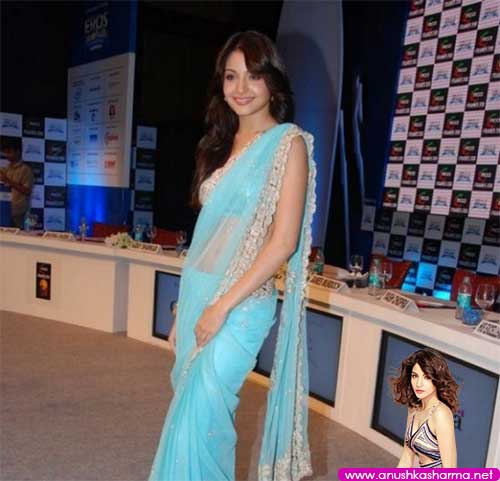 Here’s Anuskha in a half saree/lehenga saree promoting her movie “Matru Ki Bijli Ka Mandola.” The colour combination is quite kitschy, but what only matters is that she looks good. 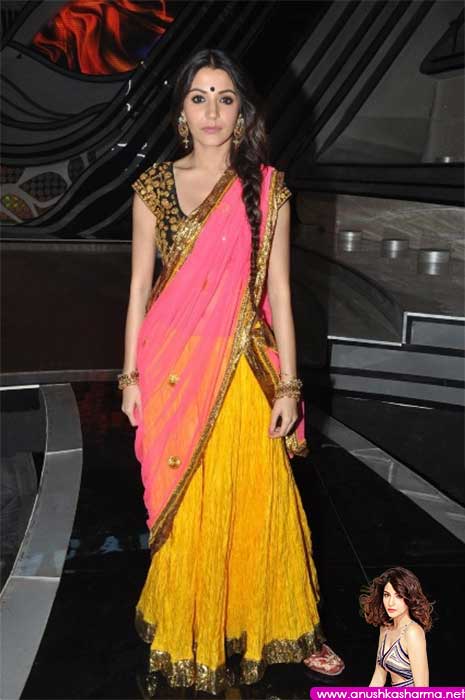 She looks pretty as a picture in this typical lightweight red saree, the huge gold necklace adds elegance to the whole look. 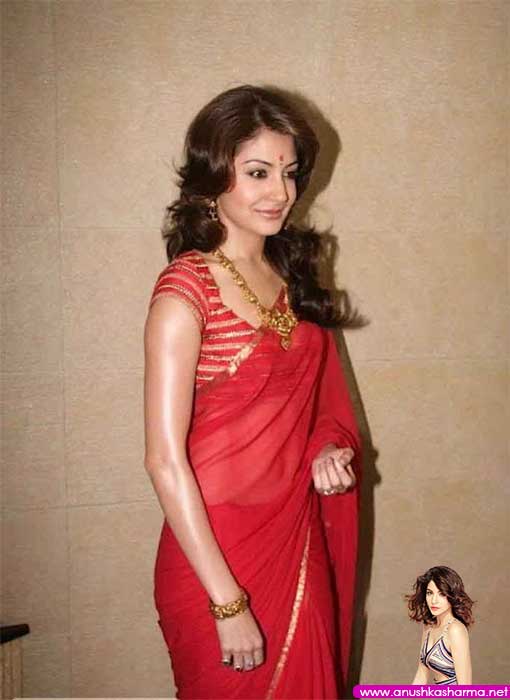 Here are some pics of Anushka Sharma walking the ramp in saree for various designers: 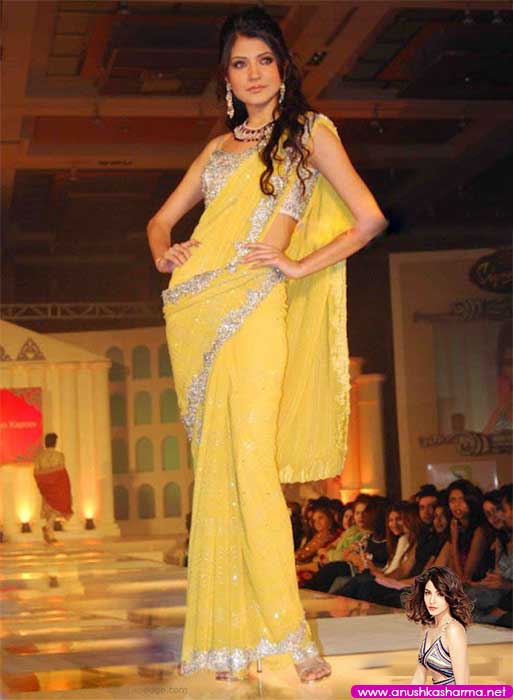 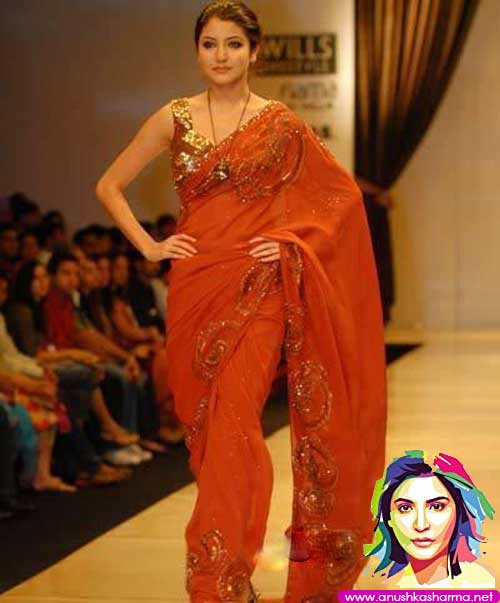 This one seems to be a saree, isn’t it? 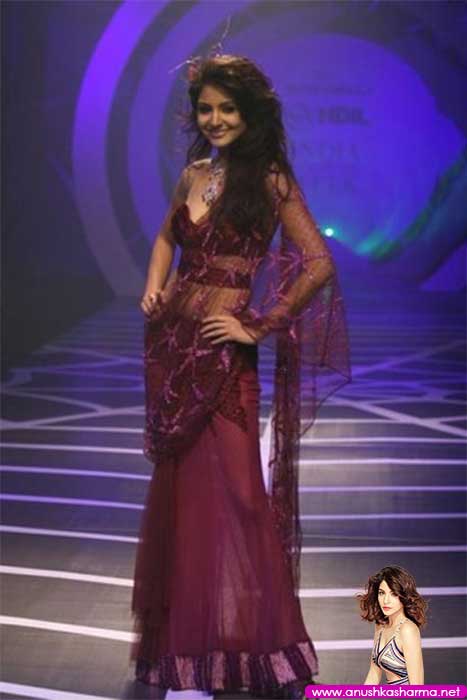 A pretty boring saree except for the low cut blouse, nevertheless, she looks good. 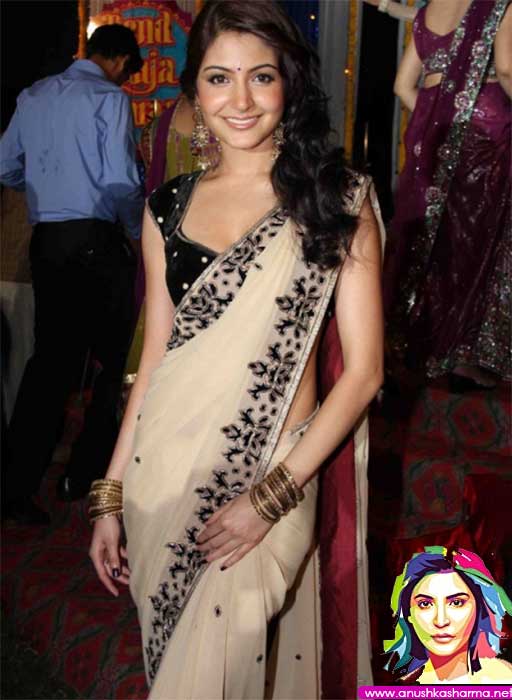 Saving the best for the last, she appeared in a beautiful velvet and light pink Sabyasachi saree with full sleeved embroidered blouse. She looked like a million dollars in this one. 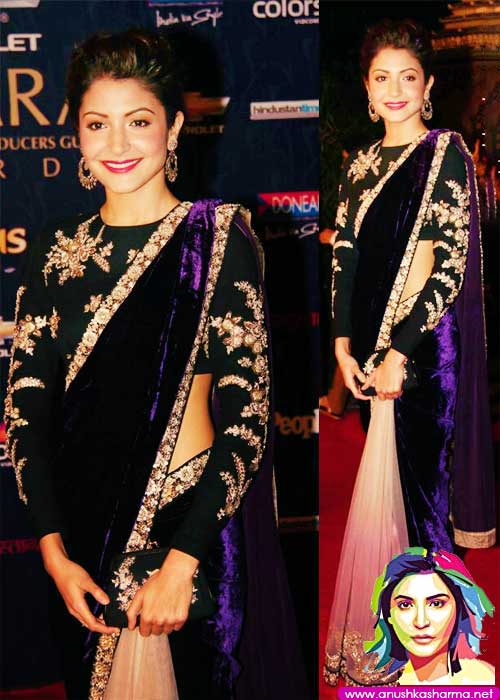 Winding up this compilation with just a small suggestion to Anushka, you look too pretty in sarees, wear them often for your public appearances.

Sari – Saree
A sari (sometimes also shari or misspelled as saree) is a women’s garment from the Indian subcontinent that consists of an unstitched drape varying from 4.5 to 9 metres (15 to 30 feet) in length and 600 to 1,200 millimetres (24 to 47 inches) in breadth that is typically wrapped around the waist, with one end draped over the shoulder, partly baring the midriff. There are various styles of sari manufacture and draping, the most common being the Nivi style, which originated in the Deccan region. The sari is worn with a fitted bodice commonly called a choli (ravike & kuppasa in southern India, and cholo in Nepal) and a petticoat called ghagra, parkar, or ul-pavadai. In the modern Indian subcontinent, the sari is considered a cultural icon.