Anushka Sharma on the cover of Notch Magazine – January 2013
Anushka Sharma speaks about her journey to the top of Bollywood from an outsider to an A-lister. Anushka Sharma, Imran Khan and Pankaj Kapoor star in Vishal Bhardwaj’s new movie Matru Ki Bijlee Ka Mandola.

NOTCH Magazine
NOTCH is an Indian entertainment and lifestyle online magazine. It is part of privately held Pradeep Dadha Group of Companies, with Pradeep Dadha as chairman. NOTCH’s corporate office is located in Chennai, India. 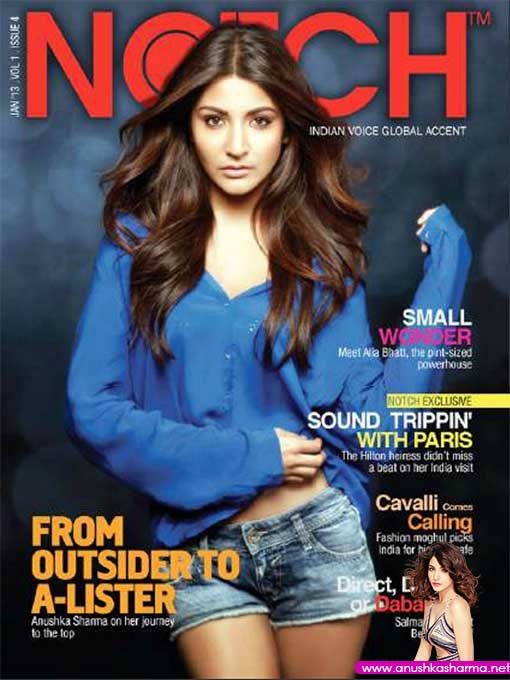 NOTCH is an interactive, digital magazine that gives readers an edgy perspective of the influence of contemporary India with a real-time responsiveness that is sure to involve and engage its readers. With Indians making their presence felt in every social, economic and artistic arena, the focus is on the global Indian and their growing influence in all spheres of business, art, culture, literature and entertainment.

NOTCH showcases lifestyle supported by powerful and artistic digital imagery. The magazine gives you an insider’s view of India through diverse topics that take you headlong into the world of high fashion, avant-garde art and design, cutting edge culinary reinventions, entertainment, travel, interviews with thought-leaders and opinion makers, the latest in digital literature and a peep into culture that defines the sub-continent.

The magazine is targeted at catering to the reader who shares our fascination with India and its masala-fication.